The Reuters/University of Michigan consumer sentiment index plunged to its lowest level since March 2009, down from 71.5 in June to just 63.8 in the first of two readings in July, as a faltering economy, weakening labor market, and the ongoing debate over the debt ceiling and spending cuts sapped the confidence of Americans.

Interestingly, the last time the mood of the consumer was this sour, the S&P500 stock index was below 800, more than 42 percent below its current level. 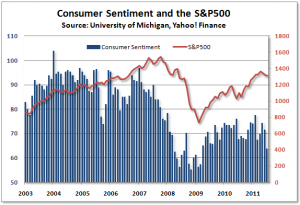 Though the July drop pales in comparison to the 10 point plunge in March (just as gasoline prices were beginning to soar) and the 12.7 point free-fall in October 2008, it was one of the biggest monthly declines in the last decade. The current  conditions index fell from 82.0 in June to 76.3 in July and the expectations index dropped nine points, from 64.8 to 55.8.

Unlike earlier in the year, rising inflation expectations played no role in the overall decline as the one-year outlook for consumer prices fell from 3.8 percent to 3.4 percent and the five year inflation forecast dipped from 3.0 percent to 2.8 percent.