The Labor Department reported that consumer prices fell in June for the first time in a year, down 0.2 percent last month due to tumbling gasoline and heating oil prices, but annual inflation rose from 3.4 percent to 3.6 percent. 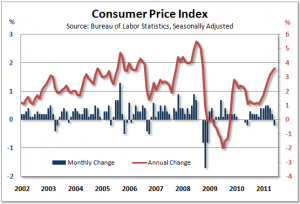 So-called “core” inflation (excluding food and energy) rose by 0.3 percent for the second month in a row. While the year-over-year rate now stands at 1.6 percent, the highest in 17 months, lately it has been rising much faster than Federal Reserve economists would like – an annualized rate of 3.2 percent over the last three months and 2.6 percent over the last six months, largely a result of soaring apparel prices and the rising cost of rent.

Gasoline prices fell 6.8 percent and the cost of fuel oil dropped 1.8 percent in June, but these energy products are still 35.8 percent and 28.3 percent higher than a year ago, respectively. As shown below, overall, energy costs fell 4.4 percent last month, but, on a year-over-year basis, are now 20.1 percent higher.

Overall food prices rose 0.2 percent in June and are now up 3.6 percent from a year ago, paced by a 4.7 percent increase in the cost of “food at home” with meat, poultry, fish, and egg prices up a whopping 7.2 percent from this time last year.

Apparel prices jumped 1.4 percent last month after a gain of 1.2 percent in May and, while up just 1.9 percent from a year ago, these prices are now rising at an annualized rate of 11.2 percent over the last three months as rising commodity prices and rising wages in the rest of the world continue to filter through to consumers in the U.S.