I don’t know the first thing about News Corp executive Rebekah Brooks, but, after watching her palling around with Rupert Murdoch over the last week or so, she was really starting to creep me out (along with much of the Western world, I would guess). It’s probably a good thing she resigned today, according to this report at Reuters. 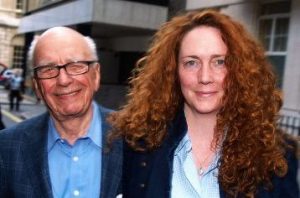 Rebekah Brooks resigned as chief executive of News International on Friday, yielding to political and investor pressure over a phone hacking scandal that has shaken Rupert Murdoch’s media empire on both sides of the Atlantic.

The 43-year-old Brooks, a former editor of the scandal-hit News of the World and of flagship daily tabloid The Sun, was a close confidante of Murdoch, who described her as his first priority when he flew in to London this week to manage the crisis at News Corp’s British newspaper unit.

In her place, he named a trusted News Corp veteran, New Zealander Tom Mockridge, who has spent the past eight years running the group’s Sky Italia television interests in Italy.

The public disgust that erupted over reports that the News of the World may have hacked into the voicemails of murder victims and other vulnerable people prompted Murdoch to shut down the paper and pull a $12-billion bid to buy the 61 percent of British pay-TV broadcaster BSkyB he does not own.

If that photo doesn’t send a chill down your spine when contemplating what the media has become, it should… She would probably bite my head off for writing this if she could…